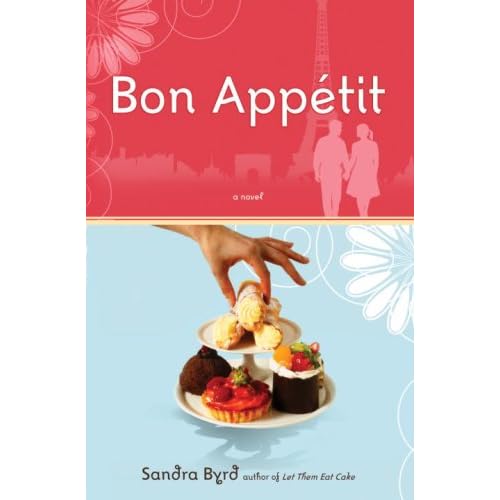 I'm giving away a brand new copy of today's book! Leave a comment with your email address so I can contact you if you win. I'll pick a name and announce the winner on Monday, October 27. US addresses only. Good luck!

An American Girl in Paris

Bonjour! Lexi Stuart has traded Seattle for France and is now working in a French bakery while going to culinary school. She has to put up with snobby coworkers and backstabbing classmates. Still she's also having the time of her life, drinking in French culture and eating chouquettes. This is an experience of a lifetime for her and it's one she'll never forget. It also doesn't hurt that she's caught the eye of the shop owner's son Philippe with his adorable daughter. Then Lexi's given the opportunity to stay on in France or go back home in Seattle where another suitor Dan is waiting. Which will she end up choosing?

This book is everything you could possibly want for a good read. Engaging storyline, delicious food, exotic travel. While the cover of the first book in this series was yummy, the cover of this one was just plain deletable. I wanted to eat this book. I think I gained weight just by reading it. I think I probably was snacking also while reading. I enjoyed reading about Lexi's journey through culinary school and her total experience in France. I would have loved to be in her shoes throughout this book. Reading about her job in the bakery was a mouthwatering experience. Watching the Food Network probably helped out a lot for me understand the book more especially with the cooking language. The recipes sprinkled throughout the book are a wonderful touch giving the reader a chance to taste what Lexi is actually making. It makes the book more interactive and helps the reader get into the story more. One thing I did not envy about Lexi was her having to choose between Dan and Philippe. They're both good guys, so I feel bad for whoever she doesn't choose. Once again this story isn't preachy yet Lexi renews her faith through a new culture. I do love her observations about how everything in France is religious centered even if the people don't notice it. Honestly I could not find anything wrong with this book. I tried. I could say that French people are snobby and that Lexi was treated unfairly but it's a weak argument. It deserves nothing less than 5 stars. This book was a joy to read and is one that any chick lit, foodie or French culture fan will enjoy. I cannot wait until the next (and final) book in the series comes out next year. Until then I think I might have to go hunt down a bakery and find me some baked treats to tide me over. VERY HIGHLY recommended.

Best-selling author Sandra Byrd enjoys a successful career writing adult, teen, and children’s books, including the Friends for a Season, Secret Sisters series and the French Twist series, including the first Lexi Stuart novel, Let them Eat Cake. She is also a regular contributor to newspapers and magazines. Sandra lives in state with her husband and two children.

Bon Appetit by Sandra Byrd is published by Waterbrook (2008)