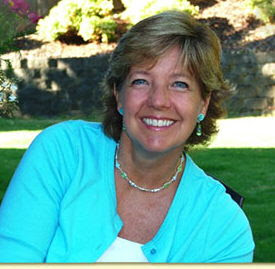 Robin grew up in Orange County, California and has lived in all kinds of interesting places, including Reno and Hawaii.

Robin’s first novel was published in 1988, and she has continued to write between two to five books a year. Her 63 published books include 47 novels, all of which are still in print. Sales of her popular Christy Miller Series, Glenbrooke Series and Sisterchicks Series, including Sisterchicks in Gondolas and the new Katie Weldon Series including Peculiar Treasures all of which are approaching four million copies sold, with translations in nine languages.

Robin’s passion for storytelling and travel are evident in all her books, especially the Sisterchicks novels, and she has received thousands of letters from readers around the world who have come to know Christ through her writing. She sees this as her dream come true. Her novels are traveling to foreign lands and her characters are doing what she always longed to do; telling people about God’s love.

She and her husband currently live near Portland, Oregon and have been married for 30 years. They spent their first 22 years of marriage working together in youth ministry, and enjoying life with their son and daughter who are now both grown.

As a frequent speaker at local and international events, one of Robin’s favorite topics is how God is the Relentless Lover and we are His first love. She delights in telling stories of how God uses fiction to change lives.

ABOUT THE BOOK
SISTERCHICK® n: a friend who shares the deepest wonders of your heart, loves you like a sister, and provides a reality check when you’re being a brat.

Two midlife mamas hop over to jolly ole England and encounter so much more than the usual tourist stops. Liz does have a bit of a childhood crush on Big Ben, and she has hoped to “meet” him ever since her fifteenth birthday. Kellie dreams of starting an interior design business and figures Liz needs to be a part of that equation–a calculation that hasn’t added up for Liz yet.

Nothing on the excursion goes the way these two friends had envisioned. They start with a village pancake race and end up being held for questioning on The Underground. Kellie and Liz take a wild tour through the land of C. S. Lewis and J. R. R. Tolkien and then find themselves swept up, up, and away in a hot air balloon over the Cotswalds. London beckons with the Tower of London, Windsor Castle, shopping at Portabella Road in Knotting Hill, and of course, reservations at the Ritz for a posh high tea.

A few detours along the way and the possibility of being lost in a London fog of wonderment aren’t enough to stop these two Sisterchicks! Each step of their regal journey is lined with evidence of God’s gracious compassion, and both come to realize that God knows their every wish. He is the One who planted every dream in their hearts.

And, oh, what a surprise awaits them when they return home!

“Robin has done it again! You and your Sisterchicks will love taking this new adventure together!”
- Karen Kingsbury, New York Times best-selling author of Between Sundays and Ever After

“My only complaint about Robin’s latest is that now I want to hop a plane to England! But combine a cup of Earl Grey tea and this charming story and you’re halfway there. Another delightful tale about women helping women to live their lives to the fullest.”
- Melody Carlson, author of These Boots Weren’t Made for Walking and A Mile in My Flip-Flops

“Sisterchicks in Gondolas is a true delight. The characters shine, and evocative language will make any reader want to visit Venice. Biblical truths are portrayed simply, yet will touch hearts and lives with their realistic application.”
- Romantic Times magazine 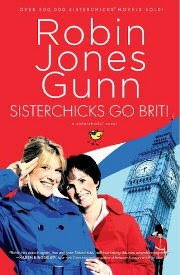 This book was an absolute joy to read. I think this book ranks as one of the best Sisterchick books ever (tying with Down Under). The main reason is because going to England has always been one of my dream getaways. And I will finally get to live it out when I go on my honeymoon next year! So this book gave me lots of ideas of what to do when I go. Going to a high class tea time is a must. And I would love to visit Oxford and pretend I was a student there. Seeing the crown jewels and watching Big Ben will be high priorities on my list. I could understand Liz's frustration with wanting to go to the city immediately instead of hanging out in the countryside. While I did enjoy reading about their adventures with the twins, I wanted them to experience the big city. I could totally relate with Liz about seeing British literature come to life first hand. I mean almost all the great classics are from British writers. I can't wait to experience Jane Austen's world, pretend I'm riding the train to Hogwarts or walking around London waiting for Aslan to whisk me away to Narnia. I can't believe that Kellie didn't know who any of the characters were. Oh I feel sorry for people who don't like to read lol. The friendship between the two women is great and it's wonderful to see how their relationship grows. Everyone needs a sisterchick in their life!

This book has made me so excited for my upcoming trip that I am dying to go now (forget a huge wedding, let's plan the honeymoon! j/k!!). This book is a great armchair traveler. Once you've finished reading you'll be craving fish and chips with a spot of tea and and will start speaking with a fake British accent. This is one of my favorite fiction series ever and I can't wait to see where we get to travel next. VERY HIGHLY recommended.