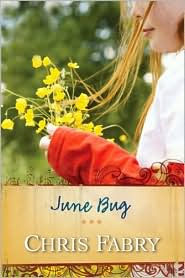 For as long as she can remember, June Bug and her father have traveled the back roads of the country in their beat-up RV, spending many nights parked at Walmart. One day, as she walks past the greeter at the front of the store, her eyes are drawn to the pictures of missing children, where she is shocked to see herself.

This discovery begins a quest for the truth about her father, the mother he rarely speaks of, and ultimately herself. But when her father’s past catches up with them, forces beyond his control draw them back to Dogwood, West Virginia, down a winding path that will change their lives forever.

When I started this book, I honestly had no idea what to expect. The majority of male authors that I read tend to fall in the suspense/thriller genre. I'm not a big Nicholas Sparks fan so I was worried that this book would turn out like that. I was so glad I was wrong. This book is really part of the literary fiction genre and tells a wonderful story that brings to life vivid characters and an intriguing storyline.

The book is told mainly from the view point of June Bug, who has just discovered that her entire life has been a lie. She is quite young at nine years old, but way mature beyond her years. Before you get up in arms, this is not a children's book at all. June Bug is someone who has seen more things in life than most adults ever will. There is nothing childish about her though there are some childlike experiences that she longs for. The book also switches to third person point of view and focuses on some of the main characters but it's not confusing at all. There are breaks that indicate when the switch happens so the reader won't get lost.

Reading about her mother made me think of other stories in the news where women decide that their lives would be best if their children got out of the way. It is sad that some people are like this and think only about themselves and consider hurting their own child so they can have "freedom." It pains me because there are so many people who do want children and are unable to have them, yet the people who don't want children keep having them. The other characters in the book are just as thought provoking, each having a story behind what is already shown about them.

The book is described as a modern version of Les Miserables. I could see the similarities but if you're really looking for an adaptation, you're not going to find it. I think the story holds up well on its own. There does seem to be a lot of product placement for Walmart but it is essential to the story. The ending doesn't play out the way I wish it had. In fact, it's rather quite sad in my opinion but I can accept it. The only other qualm I had was with the grandmother. Even though her intentions are good, she seemed to be a little legalistic in her views. I was a little annoyed that she deemed the King James Version to be THE only version of the Bible.

Overall though, this is a beautifully written story that really pulls the reader into the novel. This is my first adult fiction book from Fabry (I had read the Left Behind Kids series that he helped to cowrite) and I enjoyed it immensely. I'm looking forward to going back and reading his first adult book, Dogwood, and will be on the lookout for any future offerings from him.

June Bug by Chris Fabry is published by Tyndale (2009)