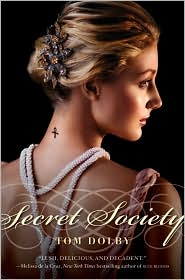 An eccentric new girl. A brooding socialite. The scion of one of New York's wealthiest families. A promising filmmaker. As students at the exclusive Chadwick School, Phoebe, Lauren, Nick, and Patch already live in a world most teenagers only dream about.

They didn't ask to be Society members. But when three of them receive a mysterious text message promising success and fame beyond belief, they say yes to everything—even to the harrowing initiation ceremony in a gritty warehouse downtown and to the ankh-shaped tattoo they're forced to get on the nape of their necks. Once they're part of the Society, things begin falling into place for them. Week after week, their ambitions are fulfilled. It's all perfect—until a body is found in Central Park with no distinguishing marks except for an ankh-shaped tattoo.

Tom Dolby makes his teen fiction debut with this riveting novel about a dangerous society so secret that once you get in, you can never get out.

Secret societies and clubs have been subjects of fascination for years. We don't seem to like it when a group keeps vital information from the public and chooses to do their business in total privacy. Books like The Da Vinci Code and The Lost Symbol have brought to attention famous secret societies that have been around for centuries. This book brings the world of the secret society to the younger set and introduces readers to the underground privileged world of New York City.

What I found most interesting about the storyline is that it seems that money and power will get you far in life because you have the right connections. You can get into the right colleges, get the career you've always dreamed of or even find the perfect spouse. This continues throughout your entire life as long as you keep to the society's codes. The main characters in this story all have dreams that are now going to come true, if they can handle the pressure and keep to the rules. Patch's point of view was probably the most interesting as he kept trying to infiltrate the society's secrets. The other three characters seem to be kept in the dark as to why they were even picked and just go along with the motions. Meanwhile, Patch knows the history of the society and has even found out secrets about them. This makes him more knowledgeable than anyone else yet he is constantly shunted by the others.

I was a bit confused as to how public the location of the tattoo is located on the body. For most males and females who put their hair up or have short hair, it is highly visible and would be questioned. Even if the wearer is secretive about the tattoo, questions would still be asked and there would be inquiries. I just felt that a more discreet location would have served a better purpose. I also wasn't a fan of how it is implied that the society comes before everything even the law. It just bothered me that just because someone is chosen, they are now more important than anyone else in the world and that rules don't apply to them. The world also seems to be a very me-centric world. A person would rather let someone die than come out and admit their guilt because they don't want to commit social suicide.

The ending does leave you hanging and eager for the next book in the series. Overall I did enjoy the story, any problems I had I hope will be addresses or remedied in the next book. I was really surprised with the lack of sex or language in the story, I had been expecting to be bombarded with both subjects and instead found the topics to be fairly tame. I am looking forward to the sequel as we discover more about the society and whether or not everyone decides they want to stay in.

Secret Society by Tom Dolby is published by HarperTeen (2009)