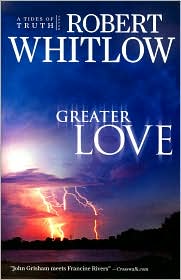 As a result of her first-rate work as a law clear, Tami Taylor's been offered a coveted position as associate partner in one of Savannah's oldest and most prestigious law firms. Though her strong faith and convictions are valued by the firm's partners, Tami struggles to discern if God's will for her career is elsewhere.

Meanwhile, Tami must protect a young client named Jessie who is on the run from some shady characters. Her association with Jessie puts Tami in mortal danger. With her life on the line, Tami falls in love and discovers the power of romantic love forged by the activity of the Holy Spirit.

Normally I don't like novels about lawyers and law practice. Half the time it's because the characters use so much jargon that I don't understand or the lawyers are so incredibly stereotyped that they are either laughable or unlikeable. The Tides of Truth series however has been perfect for me. There's a likable main character who explains everything about the law practice and the cases presented are really interesting. The story is not just about law but the people who create it and are affected by it.

Tami's family is strict and very conservative in their faith but throughout the series, it has been interesting to see her parents letting go of their control over their children. They are still strong in their beliefs but they understand that their children need to be trusted with going out in the world and sticking true to what they were taught. Out of all the books in the series, this is the book where I think they shine the most because Tami has proven that she is able to live in the world and not of it due to their teachings. This is especially true in her relationship with Mrs. Fairmont. I have enjoyed seeing the two of them grow closer throughout the series and I really liked their interactions in this book. I was glad that the book did not end on a downer with their relationship. Also of mention is the love triangle between Tami, Zach and Vance. While it was interesting, I didn't feel as if had as much zing as in the other books. The story involving Jessie was far more interesting as it is Tami's first case after she passes the bar and allows her showcase everything that she has worked hard for.

While I enjoyed most of the story, I did have several qualms. My biggest complaint is Sister Dabney. I did not like her in the second book of the series and I still did not like her in this book. While she may profess and have an actual relationship with Christ, I found her to be a bunch of hocus pocus in this book. Her visions seemed more like magic (especially having the color coded rocking chairs) and I found her to be extremely tact-less. I didn't like the way she treated Shannon especially since the reader never finds out what happened between her and her husband. Also I was very disappointed with how Tami's decision about which law firm to choose played out. She had talked with her parents, gotten outside advice and prayed about where to go when she made her decision. Then on a whim Sister Dabney tells her to do the other, and on that advice alone she changes her mind. It really bugged me because Tami kept saying that God was using Dabney to help her, but she didn't seem to consider what everyone else was saying. Plus for someone who had such strong faith, she never prayed AFTER Dabney told her what to do, just went along with the decision. This just got on my nerves which is sad because otherwise I really liked the book.

Overall, this book is more than a law story and more than a religious story. I really like how Whitlow is able to write as a first person female and does it convincingly. Throughout the series, I have grown to like Tami and her struggle between her family's faith and her desire to fit in her new life. Even though I may not have agreed with everything she believed in, I admired her for sticking to her beliefs and not allowing herself to be put in compromising situations. I believe this is the last book of the series, but if another does come out , I will be anxious to read more about Tami's adventures.

Greater Love by Robert Whitlow is published by Thomas Nelson (2010)