Book Review: "You Make Me Feel Like Dancing" by Allison Bottke 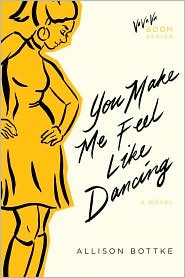 Successful fifty-something, Susan Anderson owns and operates a hip hair salon on the Las Vegas strip, decorated with her collection of disco memorabilia accumulated decades ago when she was one of the beautiful people on New York's disco scene.

Now happily married, Susan is known for her business savvy, her fabulous vintage ensembles, her faith, her big heart and the impromptu disco dance numbers salon staff and clients join in when the spirit moves. If life is a dance, Susan's mastered all the moves.

But an exciting business opportunity and her husband's impending retirement rock her world, shaking Susan's foundation and revealing regrets and painful memories she thought she'd dealt with. Will Susan be able to face her past, reinvent her marriage, build her dream … and keep on dancing?

This was a fun book to read. I would love to get my hair done at Susan's salon. It sounded like an awesome, hip place just to hang out and learn about history. I loved the scene where, in the middle of a hair session, the lights went off, the strobe came on, the disco ball came on and everyone got down and boogied. It's really a fascinating concept and if it doesn't already exist in real life, there's a gold mine idea for you right there. Susan's disco collection is massive and extremely valuable. It's interesting as to how much time and effort Susan put into her collection as opposed to relationships in real life as well as her faith and beliefs. The story starts off very breezy and happy go lucky and then spins off into more serious subjects as Susan is forced to dredge up old memories from the past. Her relationships are evaluated throughout the book, with her husband, her friends, her co-workers, old boyfriends, and new acquaintances.

It might be because I'm not the targeted baby-boomer audience, but there were some parts of the book that dragged a bit for me. Not that it was boring or not written well, I just felt that there were parts of the book that could have either been omitted or shortened. Also I got annoyed with Susan's husband Michael several times throughout the book because it didn't seem as he was concerned about his wife's feelings. I realize that he was at retiring age but it seemed like just because he was ready to call it quits that Susan had to as well. Also from the back of the book, I was expecting the online community to have a bigger role than they actually had in the story.

That being said, I did enjoy this book and it was fun to take a trip through disco memory lane with Susan's collection. After reading this book, I had an urge to put on some bell bottoms, grab a disco ball, and put on the Stayin Alive soundtrack and boogie in my living room. The Baby Boomer generation will get a kick of this book and younger readers will enjoy this blast from the past. I'll be looking forward to reading the next books in the series.