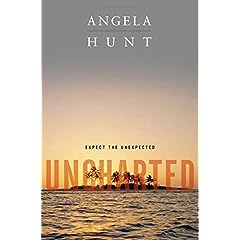 "Water water everywhere and not a drop to drink"

Wow, this book just blew me away. The back of the novel says "A blend of the movie "Castaway" and "The Big Chill" with a touch of the television series "Lost"" thrown in with the parable of Lazarus and the Rich Man. Yes that perfectly describes this book. I won't give away the ending but this is one of those books that you will think about long after you've finished it. The characters all seem to have two sides to their personalities. The two that stuck out the most to me were Mark and Lisa. At first these two appear to be complete opposites. Then it's revealed that really the two are exactly alike. Interesting to think also that just thinking about doing something is the same as actually doing it. This book also makes me wonder...is this what is going to happen on "Lost"? Angela Hunt is one of my favorite authors and proves again that she deserves to be.

Uncharted by Angela Hunt is published by Thomas Nelson (2006)