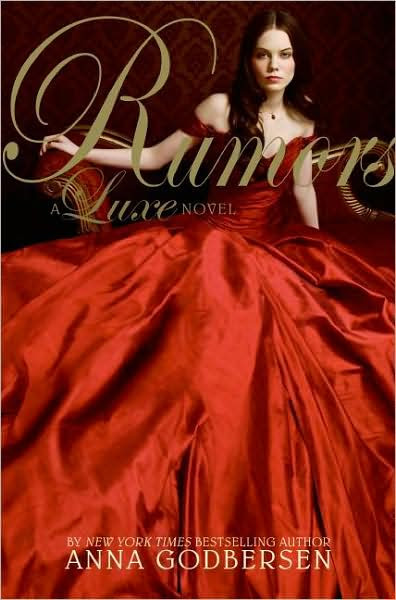 *Although the books I review on my blog are almost always Christian fiction, there will be a few spotlighted regular fiction titles I will review from time to time.*

All eyes are on those closest to the dearly departed: her mischievous sister, Diana, now the family's only hope for redemption; New York's most notorious cad, Henry Schoon-maker, the flame Elizabeth never extinguished; the seductive Penelope Hayes, poised to claim all that her best friend left behind—including Henry; even Elizabeth's scheming former maid, Lina Broud, who discovers that while money matters and breeding counts, gossip is the new currency.

As old friends become rivals, Manhattan's most dazzling socialites find their futures threatened by whispers from the past. In this delicious sequel to The Luxe, nothing is more dangerous than a scandal . . . or more precious than a secret.

I found these books to be a whole lot tame than other secular teen fiction series such as Gossip Girl, The It Girl or The A-List. Maybe it's because of the time period but there is almost no cursing and while there is teenage sex it is not as frequent as in the modern books. This series is being touted as the 1900s version of the aforementioned series. The premise being that the lifestyles of the rich and famous are always the same no matter the time period. However, regarding sex, it does make one think. This story takes place during a time period where there is no form of birth control. It appears that the characters who are having sex are doing it frequently. They seem to have no concern that they could possibly get pregnant. It just seems a little irresponsible of these teens to not think about the consequences.

Parents seem to exist only to provide the lavish lifestyles for the main characters to partake in. There is not one single grown up who is a role model for the teens. I don't know exactly how the wealthy exactly lived but I would have thought perhaps a childhood nanny or teacher could have been there to provide some sort of positive influence. It's a jarring absence that seems to enhance the surreal lifestyle. It's hard to get attached to any of the characters as I felt that they were too involved into their own drama. The only one I felt any feelings toward to was Diana and that was because she was the only one who wanted to not act like society. I was highly disappointed at the ending of the book but I can hardly say I didn't expect it. I had a feeling that situation was going to happen as there were too many events that kept leading up to that incident.

I do enjoy the covers of the books, the dresses are simply to die for although I felt that the necklines are too low for the Victorian age. That much skin would NOT be shown at all by a well-bred young female of that time period. I will read the next book in the series because although this is not the best writing that is out there, it is rather addictive.

To the readers of this blog, I would recommend reading teen lit by Melody Carlson, Erynn Mangum, Jenny B. Jones or Robin Jones Gunn over this book.

Rumors by Anna Godbersen is published by Harper Collins (2008)